I pass the same pigeon on my way to work each day. Her plumage is white with brown patches the color of wheat toast. When I approach her, she does not startle and bolt, or dodder around goofily like most pigeons.  She just calmly keeps doing what she is doing, pecking and scratching for whatever bounty city grass might provide. 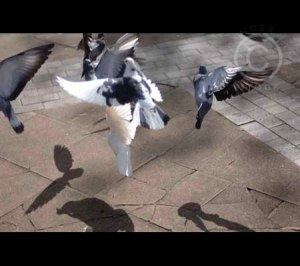 But all pigeons are the same, you say.  They look the same and they act the same.  They even seem to think the same, with a collective consciousness that, like The Borg on Star Trek, give them no identity, no individuality.  But this one is different.

She has a beau, I think.  He’s a typical black-grey-and-white pigeon who is always nearby.  He’s the one who looks ready to burst into crazy-eyed flight when I walk past, but not her.  She’s the sensible one.

As a species, pigeons (Columba livia) suffer from a bad reputation.  Originally imported to this country for food, they’ve now become naturalized citizens, inhabiting the gritty spaces of urban America. A biology professor of mine once called them the rats of the bird world.  In some cities, peregrine falcons hunt them as a means of population control. People are happy to let this happen because falcons, after all, are much cooler than pigeons.  When I lived in Burlington, Vermont, in the early 1990s, the city government decided to poison the town’s pigeons but underestimated the dose.  For several days, dazed and dying pigeons wandered the streets like intoxicated homeless people.

Such malice arises from a contempt bred by familiarity. But if you can see beyond it, you’ll find that pigeons have their virtues too. For instance, they are amazingly skilled flyers.  Watch them slicing through narrow city spaces, under bridges and around cars, and you’ll know what I mean.  Also, they have the ability, thanks to their fantastic breast muscles, to become airborne from a standstill.  Imagine suspending your entire weight in thin air with a single downbeat of wings. It sounds impossible, yet pigeons do it every day.

That is not to say they are particularly smart.  In Burlington, a pair of pigeons would nest on the stone window sill outside the office where I worked.  The nest was spare, so their egg would essentially sit on the stone.  If the egg happened to roll off, they would just lay again in the same place.  Another time, in Oakland, California, my soon-to-be-wife and I were entering the courthouse to purchase a marriage license when we heard a dull thunk from above.  A pigeon flying full-throttle had collided with the large windows above the entrance, dropping dead at our feet.  We chose not to take it as an omen concerning our marriage.

Perhaps if pigeons were smart, they would become dissatisfied with their station in life and we would have a great pigeon revolt on our hands.  Cities the world over would have to mobilize to quash the rebellion.  Overnight, squab would become a featured entrée on restaurant menus.

But my pigeon seems happy.  She looks healthy, and perhaps that is happiness to a pigeon.  She has companionship aplenty in this town.  In addition to her suitor, pigeons by the scores socialize at virtually every public space with a statue where birds can congregate.

My pigeon most likely was born in this town and will die in this town.  She will raise a few babies and scratch out a living.  She will do what she can to stay cool in the summer and warm in the winter, but her life will pass quickly by, not remarked by anyone.

Anyone except me, that is.  I’ve noticed her, and perhaps she has noticed me.  Each day, we nod greetings to each other and then go our separate ways.

Note: It has been several years since I first wrote this. My pigeon is most likely long gone.