When the failure of a product or service is discussed, people will say how “the market wasn’t there.”

When a company tries to launch something new and doesn’t succeed, they’ll say that it “didn’t do well with consumers.”

When a writer is unsuccessful, they’ll say he “failed to find an audience.”

These are all just variations of the same thing. They are euphemisms that grown-ups use for age-old playground judgements:

In fact, all of these smell of head-shaking and pity. “Poor soul,” they seem to say as the ice cubes clink in their glasses of scotch, “he just couldn’t rise to the occasion, didn’t have the right stuff.”

The month after the September 11th terrorist attacks, my wife and I decided to visit the harvest festival at Cox Farms in Virginia. She’d heard about it from our neighbors so we took a Saturday to see what it was all about.

It was a windy fall day with clear skies, and the festival area was already busy when we arrived. From the parking lot, we walked through the entry gates into an open, gently sloping area bordered by corn fields. Pumpkins, straw bales and gathered cornstalks decorated everything.

Our two-year-old daughter, bundled in layers, ran to the first activity area. It was a small stage with percussion instruments for the kids to play. Some music was coming through a sound system and my daughter picked two drum sticks and banged along on a log. My wife and I sat on some hay bales and watched the somewhat chaotic “music.”

I carried our younger child, not quite one year, in the carrier backpack. He was bundled too and hunkered down against the wind. He peered out at the activity around him but seemed content to stay in his nest.

Our daughter next wanted to try the long slide. Built into the side of a slope, I thought it would be daunting to a small child but she was game. At the bottom we waited and as she slid to a stop in the soft straw, she looked as if it were a bit much.

My wife and I had come to Cox Farms that day looking for something. It had been a rough year for us. Our son had been born through an emergency caesarian section when my wife had suffered a ruptured aneurysm while pregnant. The subsequent brain surgery, while saving her life, caused trauma that required months of rehab and supervised care. And all while we tried to raise two small children.

The aneurysm was an event that divided our lives into “before” and “after,” a clear marker that separated what we wished for our future from what was now actually achievable. The brain trauma also created a separation between “us” and “them”—those who understood what brain injury was all about and those who could not.

These twin difficulties worked in tandem to create a feeling of isolation for us. And the September 11th attacks only added to our desire to find connection with others and with a normal flow of life.

But we didn’t find it that day, nor for several years to come. The loss and the resulting loneliness were with us constantly, a formless presence that acted out when least appropriate, seeping into our daily routines and interactions. It seemed to live in our bones.

Not my actual vision, but rather my view of the future, the one that guides me forward. I can’t see it anymore.

All the light is behind me, shining on where I’ve been. I can see it much more clearly. And I spend my day looking over my shoulder, thinking of what’s past.

Ahead is all in darkness.

If I had work where I felt fully engaged, where I felt that I was using my skills for some helpful purpose, where my efforts were recognized and appreciated, then I would be able to go home each night with a feeling of accomplishment, satisfied with the knowledge that I’d done good that day. Evenings would be relaxing down-time, and I would be available for whatever was needed, whoever needed me.

As it is, I feel that my work hours are wasted time. I feel that I’m making the trek each day to fulfill an obligation, waiting for the time when I can go home and when my real life will begin.

Unfortunately, the daily ritual, in all its unsatisfying ways, grinds me down, so that by the time I reach home again, I’m running on a nearly empty tank.

If we have something planned for the evening — a school activity, my son’s baseball game — then I go with it. It will provide meaning for the day.

When there’s nothing, though, I drink some wine before dinner to recharge. It helps to bridge the gap between my lost work hours and the precious few that remain in the day. And I find that I need to seek out a task. Many people plop down at the TV for the rest of the evening, but to me, that’s more time wasted.

So I pay bills or balance the checkbook. I help one of my kids with homework or organize my desk. During summer, when the days are longer, I’ll mow the lawn or do other yard work.

And when there’s none of that to be done, I’ll want to play my guitar. Except that my nails will be too long, so I’ll have to cut them. Then I don’t want to bother with pulling my guitar case from the corner and tuning up. So I don’t.

Or I’ll think of all the great writing I could be doing. But I don’t.

I just sip my wine and wonder where the days all go.

The sailplane was wonderfully quiet, with just some wind noise as we sliced through the air, soaring high above Maryland’s Eastern Shore.

The instructor told me how to steer and then the controls–a joystick between my knees and two pedals to move the rudder–were mine.

At first, I enjoyed the view and the feeling of being suspended far above the ground on the plane’s wings, without an engine to intrude. Soon, though, I realized that I didn’t feel like I was going anywhere, and there was no sensation of speed. If I were actually trying to travel, the flight would be rather boring.

Then the instructor, asking me to look down, had me try to locate the airfield. I looked and looked, but I had no idea where it was. From our altitude, the world appeared so completely different and the landmarks unrecognizable. I couldn’t have been more lost.

Perhaps the instructor felt I was less than impressed with the flight, because then he suggested we try a “wing-over.” This is a maneuver where the plane dives to gain airspeed, then the pilot turns up sharply and banks the plane so that it topples sideways as if balancing on one wingtip. Wanting to make the most of my gift glider ride, I agreed. But as he took me through a series of three or four wing-overs, I felt nauseous and thought I was going to pass out. I wanted to get off.

“That’s enough of those,” I said into my headset, struggling to stay oriented and conscious. It was a sad dose of reality for someone who once wanted to be a pilot. 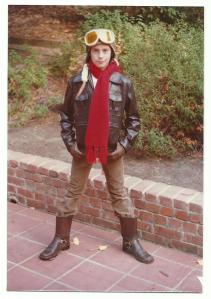 When I was young and still under the illusion that I could do anything I wanted, I dreamed of flying airplanes. The idea seemed exiting and liberating, and the airplanes themselves were shiny and sleek and powerfully beautiful.

So when I was given the glider flight as a gift a few years ago, I was stoked. This was going to be great, I told myself.

My wife and I drove to the airfield on a clear autumn day. We checked in and showed our gift certificates. After the pre-flight briefing, we were shown the two-seat training glider in which we’d each go up separately, with the instructor.

When it came to be my turn, I was excited as I climbed into the cockpit and put on my headset, letting the tow plane take us aloft. But it became clear to me that day that I don’t have what it takes to be a pilot.

You could say that I didn’t give it a fair try, that I should have put more effort into it if I really wanted to fly. But let’s not confuse interest with aptitude. It was unambiguous that I don’t have an innate ability for flight. To pursue it would be to insist on doing something that I’m not good at. That would make me vulnerable to the Dunning-Kruger effect. I could think I was a great pilot while actually suffering the fate of all incompetent pilots when I eventually crash my plane. An aircraft is not the place to have delusions of competence.

After we landed, I could feel my boyhood dream fading in the harsh light of reality. There’s a reason people don’t have wings. Most of us just aren’t cut out to be anything more than pedestrians.

I like airplanes to this day. I just no longer believe that I should be the one flying them.